The mineral rights for the Northern and Southern Noomut claim blocks were staked in February 2021, while the Esker Claim was staked in July 2021.  They are owned by the Crown and managed by the federal Government of Canada through the Department of Crown-Indigenous Relations and Northern Affairs Canada (“CIRNAC”).  The surface rights are managed by the Kivalliq Inuit Association (“KIVIA”) requiring an access agreement to perform exploration work.

Like New Break’s other Nunavut mineral properties, the Esker/Noomut Gold Project forms part of the Henik Group, central Ennadai-Rankin Archean greenstone belt.  This prolific greenstone belt is exposed in an area 700 km x 200 km forming the second largest greenstone belt in Canada, second only to the Abitibi greenstone belt in Ontario and Quebec, which has yielded over 180 million ounces of gold.

The Esker claim, which hosts the historical Esker Gold Occurrence, was discovered in 1997 by Comaplex Minerals Corp. (“Comaplex”) and lies to the east of the eastern shoreline of South Henik Lake, contiguous with the Northern Noomut claim block.  The Esker gold occurrence is located approximately 1.5 km south of the Northern Noomut claim block, where gold mineralization occurs as major parallel iron-carbonate altered veins in shear stockwork zones along contacts with deformed altered gabbros.  Mineralized structures occur over 1 km of strike length and are up to 50 metres in width.  These structures exhibit a district induced polarization chargeability response.  The project is accessible by helicopter or float plane in the summer or by land in the winter using tracked or large tired vehicles.

18 diamond drill holes have been completed at Esker for a total of 3,220 metres of drilling.

Comaplex completed seven drill holes in 1997 on the main Esker Gold Zone, for a total of 1,319 metres.  Highlights of the program are summarized in the following table (not true widths):

In March 2002, Comaplex entered into an option agreement with Placer Dome (CLA) Limited (“Placer”), whereby Placer could earn up to a 75% interest in the Noomut River Gold Project (the “Noomut Project”), which included the Esker Claim, by spending $8.0 million over a five-year period.  Placer incurred $1.85 million in exploration expenditures during the 2002 and 2003 field seasons before dropping the option at the end of 2003.

In August 2004, Comaplex entered into a new option agreement with Canadian Gold Hunter Corp. (“CGH”), whereby CGH could earn a 70% interest in the Noomut Project by spending $5.0 million over a five-year period, with a first-year exploration commitment of $350,000.

CGH completed a summer 2004 exploration program, which included six holes drilled on the Esker Claim for 1,119 metres.  In February 2005, CGH elected to drop its option on the Noomut Project to “better concentrate efforts on its key active projects”.  Significant results from the 2004 drilling program are summarized in the following table: 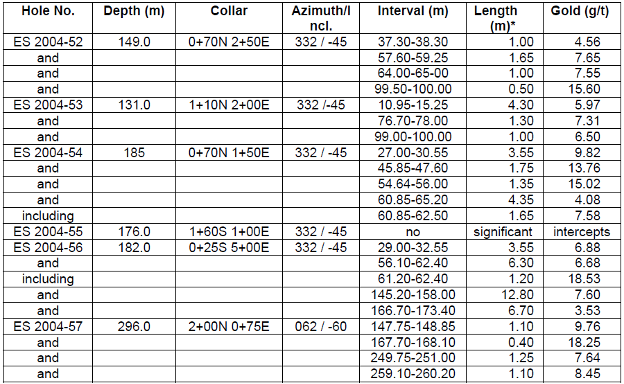 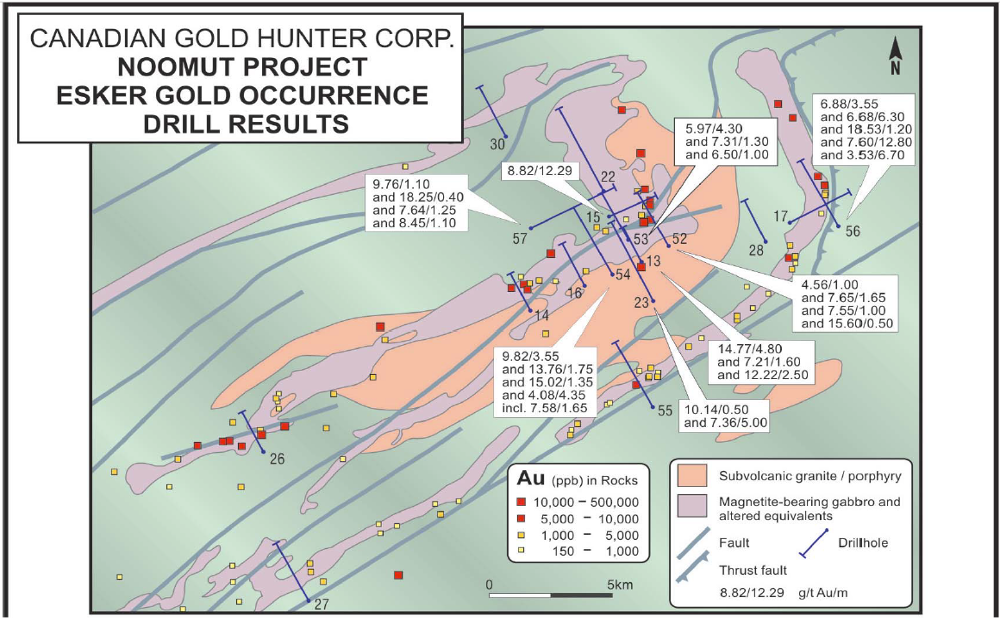 The Significance of the Esker Claim

New Break targeted the Esker/Noomut claims for on-line staking due to the prolific historical exploration results on the Esker claim.  When the Nunavut Map Selection System went live on January 31, 2021, the Esker claim was not available for staking.  In July 2021, the Company’s diligence paid off and New Break was able to stake this significantly important claim after identifying that it had come open for staking.

New Break later learned that another private company, thinking that they were the owners of the Esker claim, had completed a sizeable exploration program on the Esker claim including:

New Break considers these events as unquestionable validation of the Company’s rationale for targeting the Esker claim and Noomut area for gold exploration, and more broadly, supportive of New Break’s views on the potential for significant exploration success within the Ennadai-Rankin greenstone belt in Kivalliq Region, Nunavut, which is also host to the Company’s Sundog, Sy and Angikuni Lake Projects.

Figure 2:  Outline of Esker Claim and Outline of Area of Proposed Drilling Program 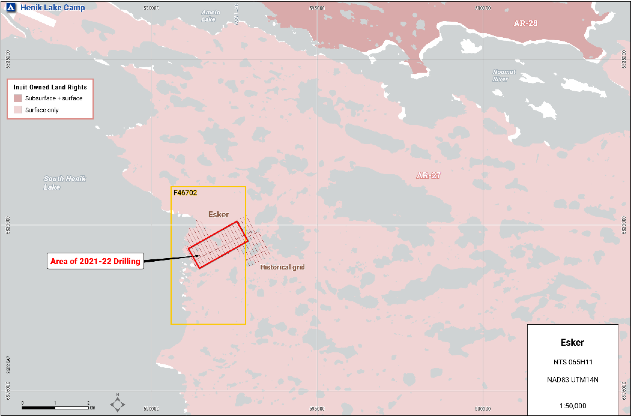 Figure 3:  Area of Historical and Proposed Drilling within Esker Claim 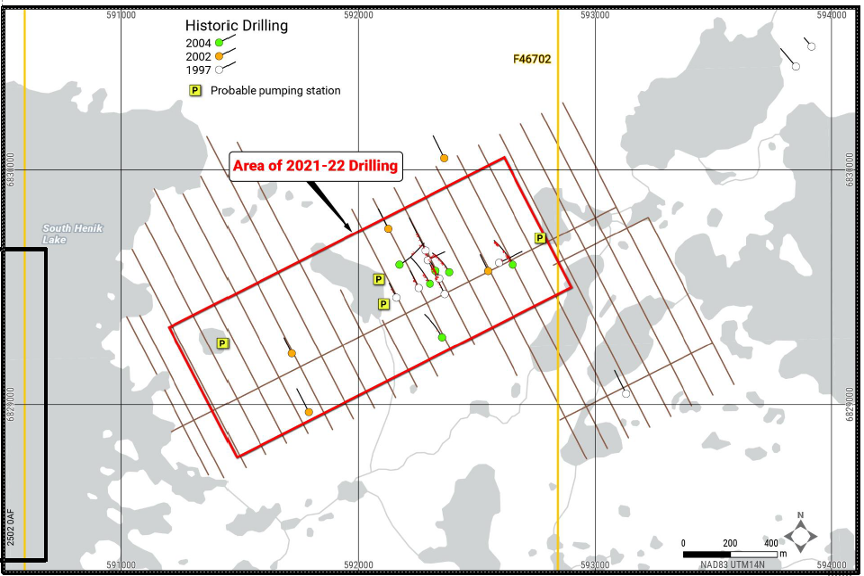 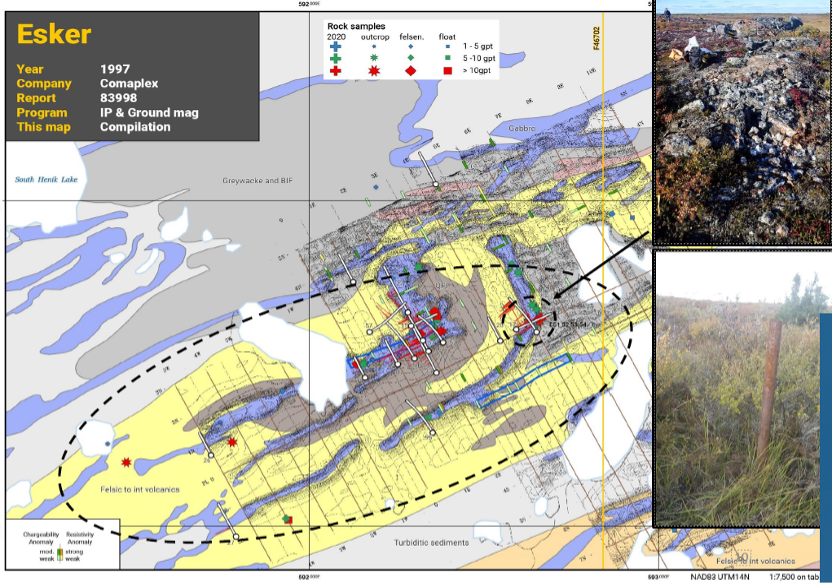 In 1996, Comaplex conducted airborne and ground geophysical surveys covering parts of the Northern and Southern claim blocks.  A helicopter‐borne airborne geophysics survey consisting of magnetics and electromagnetics (“EM”) totaled 2,930.5 line‐km.  Four (4) grids were laid out in 1996 which consisted of the 3 grids that made up the Napartok gold occurrence (Napartok Central, Napartok East, and Napartok West) and the Ironside grid, which was originally established in 1995.  Ground geophysics was done on all four grids which entailed a Total Field Magnetic survey along with a Horizontal Loop Electromagnetic survey (“HLEM”).

In total, between 1994 and 2002, Comaplex collected over 1,500 surface samples, 692 till samples, and 1,600 core samples from 39 drill holes in the South Henik Lake area, on and in the immediate vicinity of the Esker, Ironside and Napartok gold occurences.

In August 2011, an airborne geophysical survey, consisting of 596 line-km, was flown by Fugro Airborne Surveys Corp., which encompassed parts of the Northern and Southern claim blocks.   The airborne survey flight lines were orientated north‐south with a 200-metre primary line spacing and occasional 100-metre infill lines.  The helicopter‐borne geophysical survey measured magnetics and EM with a DIGHEMV multi‐coil, multi‐frequency EM system.

The Noomut Property lies within the Ennadai-Rankin Archean greenstone belt, within the Hearne Province and Kaminak Subprovince, both of which are part of the Western Churchill geological province of the Canadian Shield.  This prolific greenstone belt extends westward for over 700 km from Rankin Inlet.

The regional geology of the Esker/Noomut Property area comprises Henik Group rocks, which consist of middle greenschist facies metamorphosed volcanics, sediments and intrusives.  The volcanics consist of intrusive and extrusive lavas along with pyroclastics, which range in composition from ultramafic to felsic.  Andesites and basalts are the main compositions, while dacites, rhyolites and gabbros can be observed in minor quantities.  The sediments overlie the volcanics and are mainly composed of argillites and greywackes.