New Break engaged Orix Geoscience Inc. (“Orix”) to oversee the grab and channel sampling programs and complete detailed structural mapping of the Voyager and Fiset areas, which included taking 74 grab samples from various areas of the Moray property, including in and around the historical Trench 12, stripped by SGX Resources Ltd. (“SGX”) in 2012 at the Voyager showing (“Trench 12”).  The highest-grade grab sample of 70.60 grams per tonne gold (“g/t Au”) was located at the south end of the main Trench 12.  Five samples from New Break’s program yielded assays higher than the highest 21.8 g/t Au assay from the 2012 SGX prospecting and trenching program.

Highlights from the outcrop and boulder surface grab sampling program are presented in the following table:

Outcrop and boulder grab sampling results, along with channel sampling results from the historical SGX Trench 12 Voyager showing area are presented in Figures 1 and 2.  Figure 1 presents the high-resolution drone imagery from the drone survey completed by Orix, while Figure 2 layers on geology and structure as mapped by Orix. 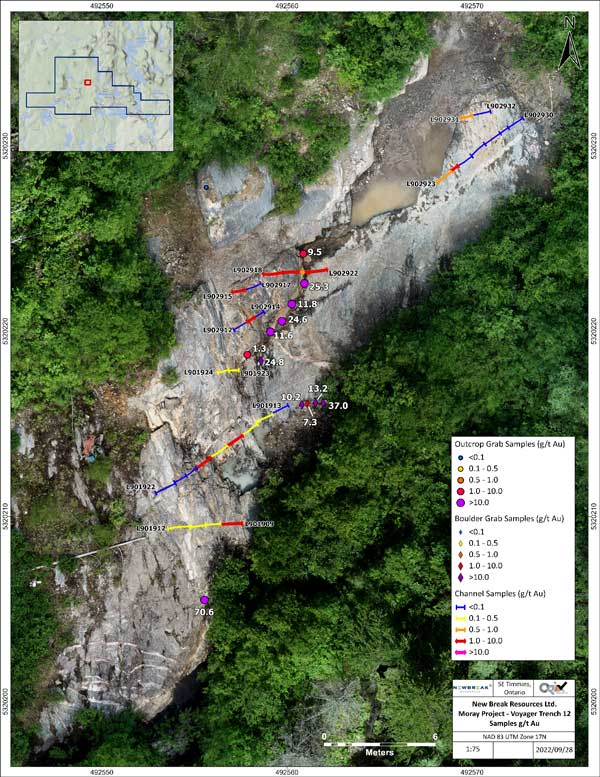 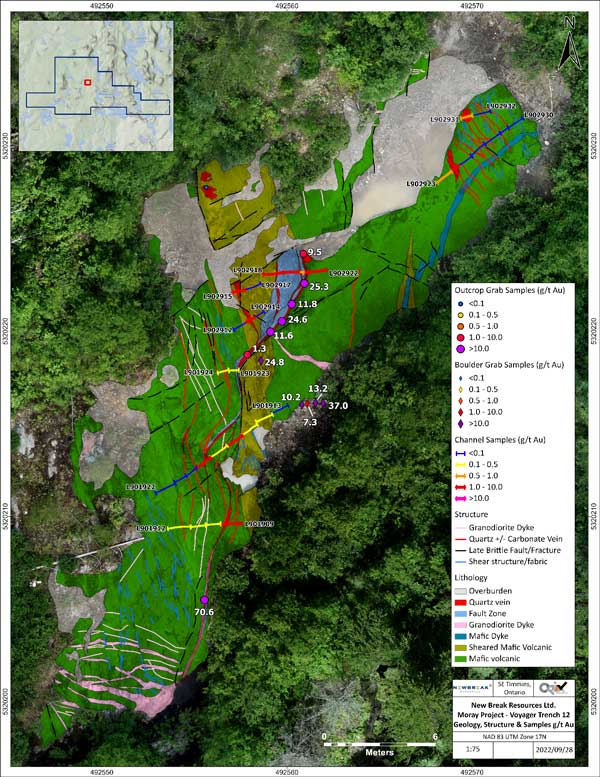 In June 2022, New Break engaged CXS Canadian Exploration Services Ltd. (“CXS”) out of Larder Lake, Ontario, to complete an initial program of approximately 3,800 m2 of mechanical stripping, principally focused on the Voyager area, including the historical SGX Trench 12 and the Fiset area, including the historical SGX Trench 1 and the NOR vein discovered by Noranda Inc.  In addition, while SGX did complete 2,285 m2 of mechanical stripping in a 15-trench program in 2012, SGX did not cut channel samples.  As a result, CXS washed both the newly stripped areas and the historical SGX trenches 1 and 2 at Fiset and trench 12 at Voyager which was followed by a 135-sample channel sampling program.  The channel sample areas were marked by New Break personnel and cut by CXS, with the program being completed on July 17, 2022.

Results from the Fiset showing area, including the historical SGX Trench 1 and the NOR vein, discovered by Noranda Inc., are presented in Figure 3. 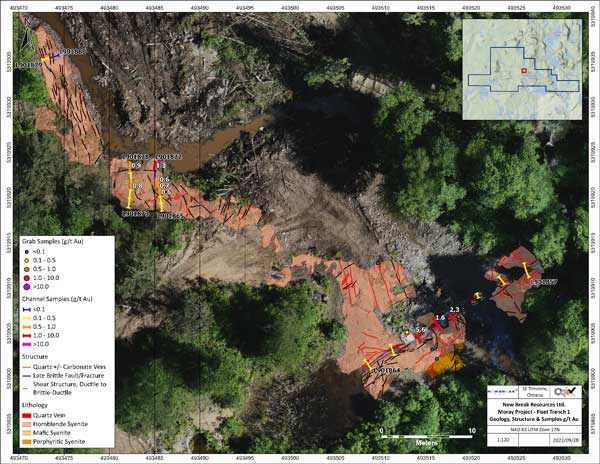 The shear and extensional/splay veins associated with the Voyager area are hosted in mafic volcanics. The veins are strongly pyritic with local concentrations of up to 20% pyrite.  Structural mapping work completed by Orix observed that the NNE-NE shear vein and the N-S extensional veins have not been traced or tested.  It has been determined that drillhole ML12-01, drilled by SGX in 2012 on an azimuth of 45 degrees NE and collared 18 metres SW of the south end of trench 12, was drilled parallel to the strike of the main shear vein.  New Break has examined the drill core from ML12-01 and noted that the section from 79.5 to 81.0 metres is strongly pyritic and brecciated with evidence of an earlier fabric in the brecciated fragments.  This section graded 2.47 g/t Au over 1.5 metres and is proximal to the mafic volcanic – syenite contact at 83.4 metres.  The mafic volcanic – syenite contact graded 0.494 g/t Au over 12.1 metres from 79.5 to 91.6 metres.  New Break has concluded that drillhole ML12-01 likely “clipped” the NNE trending shear vein.

New Break believes that the gold bearing extensional/shear vein development at Trench 12 represents a strongly auriferous gold structure with the highest gold assays yet recorded on the Moray property.  The vein system at Trench 12 is likely close to the mafic volcanic – syenite contact to the northeast as evidenced by SGX drillhole ML12-01.  At present, it is unknown as to whether the shear vein extends into the syenite.  The vein systems are noticeably rich in pyrite and quartz carbonate alteration which should yield good chargeability and resistivity results from the proposed IP survey.

The channel results from Fiset Trench 1, which include channel samples taken from the original NOR vein, are generally comparable to grab sample results produced through the SGX prospecting program in 2012.  The NOR vein remains untested to the northeast and southwest.

In order to follow up the excellent assay results at the Trench 12 Voyager area, New Break mobilized an excavator to Trench 12 on September 21, 2022, to conduct additional stripping, as the shear vein remains untested to the NNE and to SSW.

New Break also plans to conduct an additional Very Low Frequency (“VLF”) survey to trace the shear and extensional vein systems with lines spaced perpendicular to the azimuth of the shear vein.  Additionally, New Break intends to conduct a 3-D Induced Polarization (“IP”) survey of both the Voyager and Fiset areas during Q4 2022.  The data from the additional stripping and geophysical surveys in combination with the results expected from 46 till samples taken by IOS Services Geoscientifiques Inc. in June 2022 to analyze gold grains in bedrock, will assist in planning a drilling program, expected to be undertaken in Q1 2023.

Samples collected in the 2022 channel and grab sampling program were delivered to ALS Global (“ALS”) in Timmins, Ontario for preparation and were assayed for gold by ALS Global in Vancouver, British Columbia.

New Break implemented a strict QA/QC protocol in processing all channel and grab samples collected from the Moray property to ensure best practice in the sampling and analysis of the surface samples.  Channel sample lines were located and measured perpendicular to shear vein trends and marked at 1.0 metre to 1.5 metre intervals.  Blanks and certified standards were inserted into the channel sample stream at batch intervals of 10 assay tags.  Final GPS control of the sample lines was determined from drone imagery.   The 20th sample in the grab sample sequence was either a blank  or a certified standard.

All channel rock samples were put in sturdy plastic bags, tagged, and sealed in the field by CXS personnel under the supervision of Orix professional geologists and Peter C. Hubacheck P. Geo. and QP.  The channel sample bags were then put in rice pouches before being transported by CXS personnel to their secure facility in Larder Lake.  The grab samples were collected by Orix professional geologists and transported in rice pouches to the ALS preparation lab in Timmins.  The channel samples were transported by truck by CXS to ALS at their Timmins, Ontario facility for sample preparation where the samples were crushed to better than 70% passing 2mm, 1kg riffle split and pulverized to 85% passing 75 microns. Pulps were forwarded to ALS Global in Vancouver, British Columbia for analyses.  The program collected samples for both gold and base metal multi-element analysis.  Gold analyses are obtained via industry standard fire assay with ICP finish using 30 g aliquots.  For samples returning greater than 10.0 g/t, gold follow-up fire assay analysis with a gravimetric finish is completed.  Based on initial fire assay gold indications as well as visual indication of mineralization and alteration, intervals are selected for re-assay by the screen metallic fire assay method.  Base metal samples were analyzed for 48 trace and major elements by ICP-MS following a four-acid digestion.  ALS Global are ISO/IEC 17025:2017 accredited (Lab No. 579) for the preparation and analyses performed on the New Break samples.

Peter C. Hubacheck, P. Geo., consulting geologist to New Break, and a Qualified Person as defined by National Instrument 43-101, has reviewed and approved the technical disclosure in this news release.

New Break is a Canadian mineral exploration company with a dual vision for value creation.  In northern Ontario, New Break is focused on its Moray Project, in a well-established mining camp, within proximity to existing infrastructure, while at the same time, through our prospective land holdings in Nunavut, we provide our shareholders with significant exposure to the vast potential for exploration success in one of the most up and coming regions in Canada for gold exploration and production.  New Break is supported by a highly experienced team of mining professionals committed to placing a premium on Environmental, Social and Corporate Governance.  Information on New Break is available under the Company’s profile on SEDAR at www.sedar.com and on the Company’s website at www.newbreakresources.ca.  New Break began trading on the Canadian Securities Exchange (www.thecse.com) on September 7, 2022 under the symbol CSE: NBRK.