Toronto, Ontario, December 7, 2021 – New Break Resources Ltd. (“New Break” or the “Company”) is pleased to announce that it has acquired the 1,408 hectare, gold-mineralized Esker Claim, adjacent to the Company’s Noomut claims and located on the eastern shore of South Henik Lake in Kivalliq Region, Nunavut, approximately 179 km northwest of Arviat (the “Esker/Noomut Gold Project”). The Esker Claim was staked on-line through the new Nunavut Map Selection System at a cost of $3,285 after it came open for staking and hosts a 1997 drill intercept of 2.35 g/t Au over 70.95 metres, drilled by Comaplex Minerals Corp. (“Comaplex”).

The Esker Claim, which hosts the historical Esker Gold Occurrence, was discovered in 1997 by Comaplex and forms part of the Henik Group, Ennadai-Rankin greenstone belt. Mineralization occurs as major parallel iron-carbonate altered veins in shear stock work zones along contacts with deformed altered gabbros. Mineralized structures occur over 1 km of strike length and are up to 50 metres in width. These structures exhibit a district induced polarization chargeability response. The project is accessible by helicopter or float plane in the summer or by land in the winter using tracked or large tired vehicles.

Comaplex completed seven drill holes in 1997 on the main Esker Gold Zone, for a total of 1,319 metres. Highlights of the program are summarized in the following table (not true widths):

In March 2002, Comaplex entered into an option agreement with Placer Dome (CLA) Limited (“Placer”), whereby Placer could earn up to a 75% interest in the Noomut River Gold Project (the “Noomut Project”), which included the Esker Claim, by spending $8.0 million over a five-year period. Placer incurred $1.85 million in exploration expenditures during the 2002 and 2003 field seasons before dropping the option at the end of 2003.

In August 2004, Comaplex entered into a new option agreement with Canadian Gold Hunter Corp. (“CGH”), whereby CGH could earn a 70% interest in the Noomut Project by spending $5.0 million over a five-year period, with a first-year exploration commitment of $350,000.

CGH completed a summer 2004 exploration program, which included six holes drilled on the Esker Claim for 1,119 metres. Significant results are summarized in the following table: 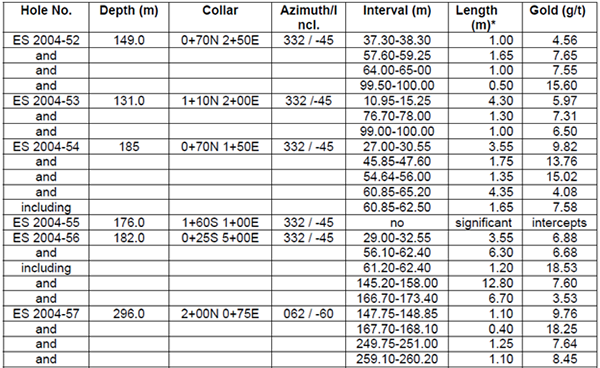 In February 2005, CGH elected to drop its option on the Noomut Project to “better concentrate efforts on its key active projects”. 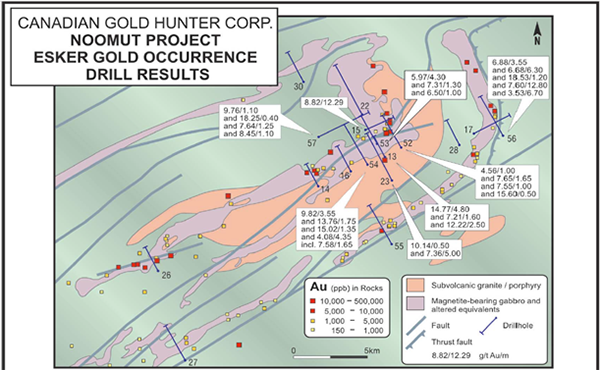 In 2020, according to information publicly available on the Nunavut Impact Review Board website, a Toronto-based geological consulting company completed ground reconnaissance of the Esker Claim, including locating the drill collars for all 18 drill holes from the 1997, 2002 and 2004 drilling programs and took 18 due diligence samples from mineralized sections of drill core from seven of the drill holes. The public records indicated that the results exhibited good correlation to previous assays. In addition, the records indicated that they collected gold bearing grab samples of greater than 3.0 g/t Au along the entire length of two adjacent zones, including four individual due diligence grab samples that assayed 33.8 g/t Au and 25.6 g/t Au. Next steps include state-of-the-art airborne geophysics and geochemical prospecting.

Michael Farrant, New Break President and Chief Executive Officer commented, “During 2021, New Break has built a portfolio of mineral claims in Kivalliq Region, Nunavut having the potential to host significant gold mineralization. In addition to the acquisition of invaluable historical Nunavut exploration data compiled by Ken Reading and the recent execution of an Inuit Owned Lands Mineral Exploration Agreement with Nunavut Tunngavik Incorporated on the Sundog Project, New Break believes that the addition of the Esker Claim represents a game changer to the Company’s Nunavut gold exploration efforts due to the advanced status of the property supported by impressive historical drill results.”

Mr. Farrant also noted, “New Break’s efforts in Nunavut are further supported by a group of advisors that includes famed Canadian prospector Ken Reading, Gordon Morrison, former President of TMAC Resources Inc. and John Todd, former senior government official in the Northwest Territories and senior advisor to Cumberland Resources Ltd. and Agnico Eagle Mines Limited, in respect of their efforts in Nunavut. Along with the Company’s fully permitted Moray Gold Project located near Alamos Gold’s Young-Davidson gold mine in the Cadillac-Larder Lake fault zone, south of Timmins, Ontario, New Break has all the pieces in place to seek a successful public listing combined with a concurrent financing. Investors wishing to hear more about our financing plans are encouraged to contact the Company.”

New Break is a private Canadian mineral exploration and development company with a dual vision for value creation. In northern Ontario, New Break is focused on acquiring highly prospective gold projects in well-established mining camps, within proximity to existing infrastructure, while at the same time, through our prospective land holdings in Nunavut, we provide our shareholders with significant exposure to the vast potential for exploration success in one of the most up and coming regions in Canada for gold exploration and production. These complimentary visions are supported by a highly experienced team of mining professionals committed to placing a premium on Environmental, Social and Corporate Governance, respecting the values and interests of all our stakeholders.

CAUTIONARY NOTE REGARDING FORWARD LOOKING INFORMATION
Except for statements of historic fact, this news release contains certain “forward-looking information” within the meaning of applicable securities law. Forward-looking information is frequently characterized by words such as “plan”, “expect”, “project”, “intend”, “believe”, “anticipate”, “estimate” and other similar words, or statements that certain events or conditions “may” or “will” occur. Forward-looking statements are based on the opinions and estimates at the date the statements are made, and are subject to a variety of risks and uncertainties and other factors that could cause actual events or results to differ materially from those anticipated in the forward-looking statements including, but not limited to comments regarding the timing and expectations for finalizing property agreements, timing and content of upcoming work programs, geological interpretations, receipt of property titles, an inability to predict and counteract the effects of COVID-19 on the business of the Company, including but not limited to the effects of COVID-19 on the price of commodities, capital market conditions, restriction on labour and international travel and supply chains etc. Forward-looking information addresses future events and conditions and therefore involves inherent risks and uncertainties, including factors beyond the Company’s control. Accordingly, readers should not place undue reliance on forward-looking information. The Company undertakes no obligation to update publicly or otherwise any forward-looking information, except as may be required by law. Additional information identifying risks and uncertainties that could affect financial results is contained in the Company’s financial statements and management’s discussion and analysis (the “Filings”), such Filings available upon request.